So Uganda (like Nigeria, Russia and other backward thinking regimes) finally signed the law that consigns its gay citizens to the ghetto. Yes, let brimstone fall from angry heaven and devour those “disgusting” sexual deviants. It’s all for the children. When African and Russian leaders are busy looting their countries’ funds and salting them where those funds are protected by the West’s legislative framework these “leaders” are of course also thinking about the children: the children starved of funds that should be building, for them (I mean, the children), a better country.

Below are some quotes from Museveni’s gay-baiting speech showing the abysmal quality of leadership and thinking generally exhibited by African leaders and, let’s be frank, the religiously devout.

“Africans are flabbergasted by exhibitionism of sexual acts”.
He probably means disgusted. if instead they are ‘astonished’ what’s the issue?

“I am not able to understand the logic of the Western Culture … Since Western societies do not appreciate politeness”. He doesn’t understand except when he and his ministers are lining their pockets with aid money and stuffing stolen funds in western banks.

He then quotes a well-known Swedish study that surmises genes account for a third of the homosexuality in a sample of identical twins. For Museveni that proves being gay is a choice. We share 98% of our genes with chimpanzees and yet that errant 2% makes all the difference between being a chimp and being human. It doesn’t take much difference in genes to make a hell of a lot of difference in a living organism. Oops, not the kind of reasoning one expects from god-believers since they, out of hand, reject any science that conflicts with their holy books.

“let me .. warn our people publicly about the wrong practices indulged in and promoted by some of the outsiders. One of them is oral sex”. Apparently God doesn’t like this. Yes that mythical deity written up by some desert people a few thousand years ago and still believed in by billions of people. I am flabbergasted.

And then finally from Museveni:
“We reject the notion that somebody can be homosexual by choice; that a man can choose to love a fellow man; that sexual orientation is a matter of choice.”

What then is his problem? But then he goes on: “Since my original thesis that there may be people who are born homosexual has been disproved by science, …”

Really. What a buffoon.

Sometimes in life we make wrong choices, we take the wrong turning or we say the wrong things or we execute the wrong decisions. In life’s often peculiar manner, we remain ignorant of the wrongness of our choice until well after its terrible retribution commences. If we are stubborn we stay the course and sometimes it works out and we are celebrated as heroes and pioneers. If we are wise though we change course and we never know what might have been.

Sometimes it’s not us who made the choices but our ancestors. Jared Diamond’s insanely enlightening book “Collapse” runs through how communities/societies especially isolated ones that had existed probably for thousands of years run out of luck and come to a final gruesome end. They run out of food or get hit by an environmental disaster and, being human, eventually succumb to fractious tribal conflicts and over-religiosity in the praying to deaf gods. Eventually death comes to the last person.

Some of us will soon see this scenario (minus the last-man-standing scenario) on the isles of Kiribati. Their 3000 year existence at ‘home’, those precarious islands at most 3 meters above sea level, is about to be snuffed. Out. The excellent Bloomberg Businessweek article (link below) describes with poignant ruefulness the tragic and unravelling fate of these people. Cause: climate change compounded by poverty, isolation, ignorance, poor cultural practices, illiteracy and religion.

“Good morning, Jesus,” the preacher says, and his flock responds with alacrity, “Good morning, Jesus.” The minister—the youth pastor in the village of Te Bikenikoora—holds his Bible aloft. “Let us sing a song to ask the Lord to protect us from climate change so that we can remain in our homes.” Many of the worshipers look up to heaven for salvation.”

The minister continues: “God has such great love for us. We praise you, God, for your protection. You, God, are our No. 1 helper. We will be strong when the wind hits us. We will be protected by you. We need to be strong in our faith.”

Unfortunately, not even God can help them now. It’s too late. Anote Tong, the London School of Economics educated president of the country, gives his country 20 years. “If nothing is done, Kiribati will go down into the ocean. By about 2030 we start disappearing. We would not survive a Hurricane Sandy. We would be finished.”

If nothing is done? But who is going to do the doing? America? China? India? Those guys have bigger fish to fry. In the grand scheme of things one hundred thousand people on flat islands in the middle of nowhere are just not significant enough to stop the economic cycle; the business of feeding, clothing and enabling the 2.8 billion consumers in these countries plus of course there’s the rest of us. The Kiribatis will have to find somewhere else to live. 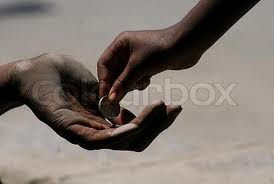 I was reading this on my journey to buy groceries in Brixton (an economically-challenged part of London once famous for ethnic minorities and riots but now being spectacularly gentrified) when I was accosted by the spectre of the old black man begging outside Sainsbury’s, the large grocery chain. He was without doubt not too far now from the end and there was no hope of redemption from his misery. What choices had he made? What choices did his parents make that screwed up his childhood? How had he compounded this during his twenties, thirties, forties and so on till his sorry present state? What cruel cards had life dealt him with which he had been too poorly skilled to play?

For several years I worked in London’s financial services sector investing money on behalf of well-to-do clients hoping to earn them a princely 4-6%pa from which my firm earned a commission and I was paid a barely living wage (“barely” – ha! after all this is London. It’s expensive. Try buying a flat white coffee!) Six weeks ago I left the money-pot investment world for the real one to do something on my own and for myself: with all the terror and excitement that striking out, perhaps on a limb, bring. It may end well. It may end in a disaster. My previous colleagues are still inside the mothership cocoon earning salaries and planning skiing holidays; perhaps not so free and brave as I (or foolish).

So here I am with one question on my mind perhaps like the ancestors of the Kiribati who struck out for those once pristine islands that had arisen out of some cataclysmic event and are now about to sink beneath another one: have I made the right choice?

Jesus would be so proud. It was he who wrecked the temple full of Republican (oops, Pharisee) hypocrites who then had him arrested and crucified. Religious nutters: time moves on but they never change.

“Republicans should refuse to raise the white flag and insist on an honorable avenue of retreat,” Buchanan wrote. “And if Harry Reid’s Senate demands the GOP end the sequester on federal spending, or be blamed for a debt default, the party should, Samson-like, bring down the roof of the temple on everybody’s head. This is an honorable battle lost, not a war.” – Pat Buchanan

Burn down the House of America because we are mad at y’all! It’s a crazy proposition isn’t it? There may be a time when one could (or should) choose death over surrender or slavery and history sure has some stunning examples. In truth most of us will never be brave  enough to make that ‘death’ choice; rah, rah we all think we will be if the time should ever come but people babble differently when faced with a gun to the temple, a ride in a car with the mafia or a trip to the gulag.

Democracy was supposed to avoid this kind of painful decision being made by factions within a country; in theory. In theory, everyone gets represented in the decision making process and everyone agrees to go along with the laws enacted by the majority under the assumption that everyone’s rights as citizens and as people will always be protected and respected e.g. the majority cannot pass a law to exterminate the minority; they can but it would be foolish of them to expect the minority to comply willingly.

By common consent what has just happened in America over the debt ceiling is bat-shit crazy. A minority faction wants the whole country to go up in flames because the majority have elected to provide basic healthcare for the poorest citizens. Is this all it takes to be suicidal? This episode demonstrates how people who are ideologically inflexible lose all sense of proportion and in this case all reason. I’m now waiting for the first Republican to set himself afire because he can’t bear the socialism of ObamaCare in America. That would be brave indeed and I guarantee he will also be a right ol’ dunce.